You know games. Most of us do. You also must know by now that there are multiplayer games, some of which are competitive. Top-players of competitive games are, in fact, well known celebrities. A fact: players stream their gameplay, and not just stream – film themselves, chat with viewers, interact with the actual frame and even get tips from their viewers. Tech companies are actually stalking the best players and hiring them to endorse their own streaming services.

Being a platform, they allow anyone (really, anyone) to stream their gameplay in style, with overlays, and in maximal ease. Streamers can set up the perfect frame, use bots to help them split their attention between the on-screen mess and the avid viewers, and obviously – get endorsed.

StreamElements has even added the option to sell unique, branded and customized merchandise, all from the same dashboard.

If you play and stream, do it properly.

In more depth: Google had some trouble in figuring out the structure of the site, which made it rank worse than it could. On top of that, Adam, the head of marketing and my contact person, had this strong sense that although the numbers in Analytics are pretty hefty, more could be done.

When looking closer, it was apparent that even though visitors are pouring in – there’s little influence over their ‘convertibility’. Namely, the likeliness they’d sign up, download the program and start using it. If we looked even closer, we could see that the streaming sites and the gaming pros themselves are a major entry point – but, not Google.

Being acquainted with several of SE’s team members, I was vouched for in Adam’s ears and brought over for a meeting, during which I have already declared that we’ll work together. You might have guessed – I’m a gamer myself. I occasionally stream, too. I share more than one interest with the people already working there. I wasn’t even trying to hide that I wanted them as a client.

Perks aside, I saw potential. Being able to imagine how a small effort would make a great difference is a feeling that is hard to put out, and I acted upon it. When we did start working, the first major improvement was obviously the website. The site was marvelous, but Google’s bot wasn’t kept in mind while building it.

Then, we had to make plans. If we’re to make plans, we must have the means of measuring them – which means a careful activity tracking (with conversions being the cherry on top).

With measurability intact, the plan itself was the final part of the StreamElements puzzle. 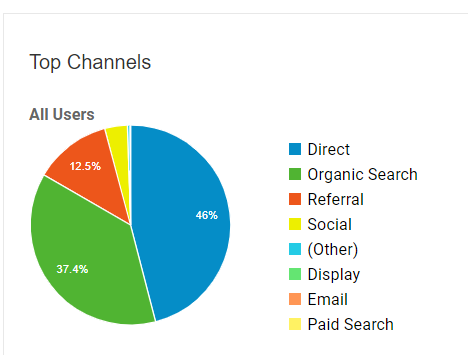 The crown jewel. My best work to date. My Sistine chapel ceiling and my 5th, all at the same time.

I won’t even bother with text. Just look.